Douglass Week celebrates changemakers and is working with the Fulbright Commission in Ireland, Fulbright Awardee Muireann NicCorcráin, and Samantha Gove and Professor Brendan Kane (University of Connecticut), to present this event. It will introduce participants to the living and historical languages of the Mohegan and Pequot tribes, and of Gaelic Ireland. The event celebrates global efforts to promote indigenous languages and cultures negatively affected by colonialism, and highlights efforts by UConn students, faculty and community partners to decolonize the Anglophone North Atlantic and to teach and promote minoritized languages. Brief presentations on each language will be followed by an opportunity to learn basic phrases and vocabulary. A discussion about minority languages and how they can be protected and promoted will allow audience members to learn more about both languages and their cultures.

Samantha Gove is an undergraduate student studying Human Rights and Sociology at the University of Connecticut. As a Mashantucket Pequot youth, she is passionate about her work at UConn’s Native American Cultural Programs, and is working to learn Mohegan-Pequot to promote discussions on the importance of language revitalization. Samantha also helps to coordinate and mentor for the UConn Indigenous Nations Cultural and Educational Exchange mentorship program, is Secretary of the Native American and Indigenous Students Association, and is working on a research project assessing police use of force against Native American people in the United States.

Professor Brendan Kane is from Reading, Pennsylvania, and received a B.A. in history from the University of Rochester, an M.Phil in Irish Studies from the National University of Ireland, Galway, and a PhD from Princeton. Prior to coming to the University of Connecticut in 2005, he spent a year as the NEH/Keough Fellow at the University of Notre Dame’s Keough Institute of Irish Studies. Currently he serves as Vice-President/President-elect of the Celtic Studies Association of North America, elected Council Member of the North American Conference on British Studies, and co-director of the digital humanities project Léamh.org.

Muireann NicCorcráin is the current Fulbright Foreign Language Teaching Assistant (FLTA) Scholar teaching Irish in the University of Connecticut. She has a B.A in History and Modern Irish and an M.Phil in Speech and Language Processing from Trinity College Dublin, and is heavily involved in Irish language activism. Muireann is also heavily involved in Gaelic Games, having served as a Youth Representative on the National GAA Youth Committee and coaching with both Buffers Alley GAA Club and Hartford GAA, CT. 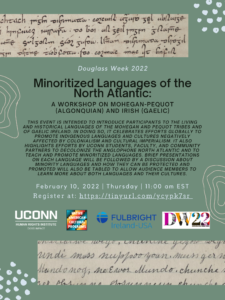