Margaret Kelleher is UCD Professor and Chair of Anglo-Irish Literature and Drama, UCD academic lead for the Museum of Literature Ireland (MoLI), and Chair of the Irish Film Institute. As a Fulbright Visiting Scholar, she researched the promotion and branding of Irish culture in America (1889-1922) drawing from archives at the Berg Collection, New York Public Library, and print and digital resources at NYU. *The below article was published in the Irish Times 23 April 2020.*

“On the afternoon of Sunday, March 8th, an Irish friend invited me to join him at a chamber music concert at the Alice Tully Hall, Lincoln Centre, New York. The venue was full to capacity, and 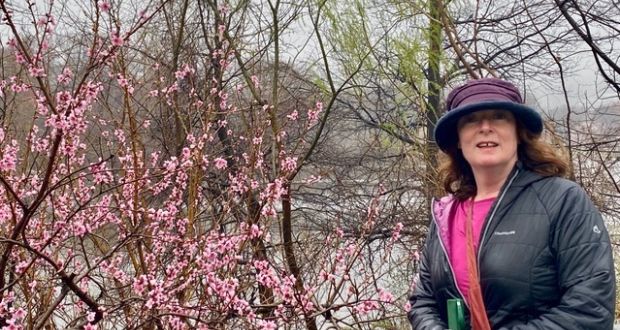 the music, a programme of Mozart, Schubert and Schumann’s 1842 Piano Quintet, was transporting.

I’d newly arrived in the city for a five-month stay, as Fulbright Visiting Scholar at Glucksman Ireland House, New York University, and spent that morning in the Frick collection, across Central Park. I remember gazing for a long time – along with lots of other Wolf Hall fans – at the Hans Holbein portrait of Thomas Cromwell, reunited across the fireplace with his sworn enemy Thomas More, and happily assembling my own inventory of future New York schemes.

Walking home after the concert, I received an anxious call from Boston friends. Careful watchers and interrogators of the news, they warned me of dire things to come in New York and then suggested I make plans to move in with them in Boston. Until then, the corona-virus had largely meant elbow bumping in New York and some email queries about the wellbeing of colleagues and friends in China.

My initial thought was that they were over-reacting but that I’d do some extra grocery shopping just in case. But then as I passed along quiet Sunday streets, I began to wonder if things could have changed utterly within a three-hour concert span. I peered into restaurant interiors to see if they were occupied (they were) and anxiously scrutinised the expressions of doormen standing outside the many affluent apartment buildings along my route home (same as before). And though some relief set in, I couldn’t stop thinking about how New Yorkers must have felt the morning of September 11th, 2001 and what kind of city spirit was forged during those fearful hours.

My studio apartment was located on First Avenue and 59th Street, overlooking 59th Street bridge. Slowing down and feeling groovy had indeed been the mantra of my early New York days. I walked and walked and walked: from bottom to top of Central Park, south along the Museum Mile, down Fifth Avenue to its southern limit of Washington Square Park (picturesque setting of Glucksman House), east to Astor Place and south along Bowery, to Brooklyn Bridge.

New Yorkers, on first encounters, appeared intimidatingly self-contained, but conversations always featured the question: “how do you find the city?”. My answer varied in honesty and with the day – “stimulating”, “overwhelming”, “fascinating”, “exhausting” – and usually generated a little sigh of disappointment at my verbal inadequacy, I thought. A favourite exchange was also the quietest one; when I dared to ask back a woman on the bus, “do you like it?”, her answer was “most of the time.”

It is a truism and true that one can be most lonely in a large city; but a mere two evenings in New York, I found myself in a cab racing along 1st Avenue, almost home (“no red since 8th street” according to the delighted driver) and finding it wonderful.

It was eerie to walk along Museum Mile and see the Metropolitan Museum closed, with a handful of bewildered tourists sitting on its grand outer stairs. On Thursday, March 12th, I changed my planned Easter flight home to the end of May and cheerfully decided to sit things out in the city: I’d lots of food, plenty of digital research to do, and a daily date to walk with one of a trusty band of friends in spacious Central Park. That same day I noticed that the magnolia tree outside my apartment window was in bloom.

The New York Times headline that day consisted of numbers in large bold font, accompanied by graphs with steep downward curves; numbers and maps of the Dow index and the “S and P 500” stock market index. In much smaller print, a corner headline noted: “Italy’s Coronavirus Victims Face Death Alone, With Funerals Postponed.”

It would take many more days for estimated numbers of Americans diagnosed with coronavirus to appear in headlines, and longer still for any victims to be named. An Irish friend who has lived for many years in New York reminded me of how, during the Gulf Wars, US reporters were warned away from reporting individual deaths. As I obsessively compared international news reports from my 1st Avenue eyrie, the continuing absence in most American media of a personalised dimension to the virus’s impact, of a human index of its effects, was astounding.

Over succeeding days, my experiences of New York veered between the comic and the sombre. One Saturday, determined to avoid the subway, I decided to avail of the quietness of city streets to try out the wonderful citibike network and my newly purchased bike helmet. Pedalling manically up 8th Avenue, past the eerily almost-deserted Port Authority and Times Square, I began to notice wide grins and thumbs up from the many traffic police standing along the way. 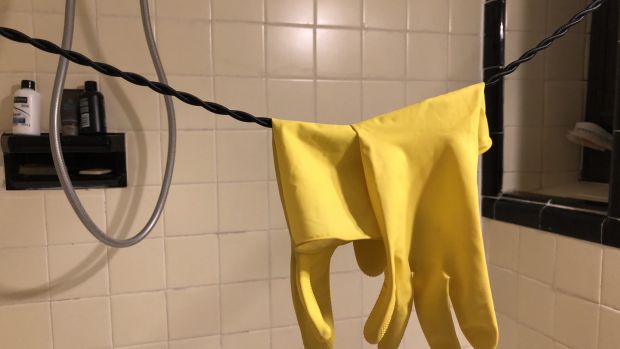 Glovely: my bright yellow dishwasher gloves worn in a recent strategy to combine hygiene with reuse

Initially a bit disconcerted, and then well on the way to mounting that “lofty vehicle, high dudgeon” (dedicated to all Keats and Chapman fans), I finally realised the cause: my bright yellow dishwasher gloves worn in a recent strategy to combine hygiene with reuse. I dismounted with some pride intact many blocks later. (“Glovely” was my sister’s response to a proud tweet and photo of said gloves, later drying on my travel clothes line…)

But to walk was also to see the now starkly visible inequities of that city. One grey day – days that are all the more depressing in New York because they seem so rare – I belatedly noticed that most others on the streets had no other choice than to be there. City dwellers with a lot of funds were already on Long Island or upstate; those with some funds like me were finding new structures and even some adventures; but for those without, shutdown and a grocery-door sign such as “we are not accepting cans right now” meant the collapse of a fragile street economy. And as I scurried past a church entrance-way on Park Avenue, a homeless man delivered a benediction in a tone of deep compassion: “you go safe, ma’am.”

Conversations with walker friends Eoin, Sheelin, Anne and Mary – hollered across socially distanced flowerbeds – featured newly sobering stories and practical hygiene hints. Tales included that of the doorman quietly asking an apartment owner for masks, not for himself, but for his policeman son, and of members of impoverished families riding the subway all day to practice social distancing.

Cuomo’s daily news briefing became the centre of our New Yorkers’ day, and a rare vehicle of public solace and some political trust. A walk along the reassuringly wide boulevard of Park Avenue now brought, at 77th Street, the sight of refrigerated trunks serving as temporary morgues for Lenox Hill hospital. News that a field tent hospital was being built in Central Park reached me from horrified friends in Dublin before it featured prominently in local news. Information regarding its funding by the evangelical Christian relief group Samaritan’s Purse, whose employees are required to endorse a statement opposing same-sex marriage, percolated more slowly.

All through these weeks, I was determined to stay. Looking back on that now, I can recognise the deep concern this was causing to family and friends as news from the United States accelerated in grimness. But to live in the city, safely cocooned in the privilege of my writer’s retreat, felt like a badge of honour: participating in the nightly seven o’clock cheers and saucepan banging for front-line workers, lighting a candle at my apartment window and returning waves of solidarity across 1st avenue.

Meanwhile the warnings from Ireland’s Department of Foreign Affairs grew stronger and more urgent, exhorting those on short-term visas to return home, and the danger of outstaying my visa and health insurance began to outweigh the much-feared prospect of a long flight home. On the morning of Monday, March 30th I booked a flight home for the following Friday; articles online at the New York Times that morning included an interview with “a veteran ER nurse” entitled “What September 11 taught us about confronting catastrophe”.

At JFK, I encountered a long check-in line, only to discover that I’d joined a line of transport authority workers waiting to be laid-off that evening. When I asked the man at the Aer Lingus desk how he was, he replied “glad to have a job, ma’am”. The flight to Dublin had 20 of us onboard; the number of passengers from Dublin to New York that morning: zero.

Love and affection winged me home, along with practical help from two generous and loyal friends, one who organized transport to JFK and the other who met me, both of us masked and gloved, in Dublin airport.

My two weeks in self-isolation, alone in the comfortable Inchicore home of another hospitable friend, have now come to a close. And as I write, I find myself homesick for New York, admittedly my home for just eight weeks, but I’m now part of a huge community of Irish people who avidly check out the American news, fearful for friends, family and colleagues, for their physical wellbeing today and their political wellbeing in the future.

As today’s headlines record one man’s claims to an authority that is “total”, it’s time to bang those saucepans and honk those car-horns louder and louder in New York, in Pennsylvania, in Wisconsin, in Michigan, now and in the months to come.”