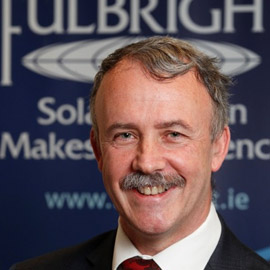 Colin Bradley is Professor of General Practice in the School of Medicine at UCC. As Fulbright-HRB HealthImpact Scholar to University of Oklahoma, he is undertaking research on strategies to improve opioid prescribing by primary care physicians.

“Landfall  - O’Hare International Chicago.  It’s a vast airport – more similar to Schiphol, Amsterdam with what seems like one vast terminal rather than multiple terminals like Heathrow. I am immediately struck by the number of food outlets which seem to be in at least a 1 to 1 proportion to all the other numerous shops.  We made our way from the concourse where inbound international flights come in to another concourse which was obviously for domestic flights. Flights to places like Buffalo, Boise and De Moines. We whiled away several hours of lay over absorbing the variety of people coming and going.  We were joined shortly before boarding by a real Okie gentleman who was almost comically stereotypical - right down to his cowboy hat and the stick in his mouth. He told us he had just come from Belgium. “A great little country”. “Hm”, I thought. Surely Ireland is the ‘great little country’ in Europe.  He asked us if we would be going to the match. He seemed mildly appalled that we don’t know what match he was talking about. He was referring to an up coming college football match between Oklahoma’s two universities – University of Oklahoma (the Sooners) and Oklahoma State University (the Cowboys).

When we eventually arrived in Will Rogers World Airport, Oklahoma City we were greeted by a spectacular thunder and lightening storm.   We picked up the hire car and, with the aid of Google maps, made our way to North Shartel Avenue where our landlady, the marvelous Marva, was waiting for us sitting on the steps to our duplex – one half of a house made into two apartments.  The apartment is very pleasant.  It is pretty spacious and has all mod cons including a waste (garbage) disposal thing in the sink that creates an almighty din as it chews up everything sent its way. Especially important in the 35 plus degrees heat is the air conditioning.

Next day we started to get sorted.  First we went to an amazing supermarket, recommended by an American cousin, called Wholefoods.  It is targeted at a very specific clientele of health conscious consumers.  Everything seems to be low fat, gluten free, full of vitamins and combinations of these features.  Some of the items seem very strange indeed, such as grain free granola. Oddly, though, everything seems to be quite replete with sugar.  This is one potentially unhealthy ingredient that it seems Americans may find it just too hard to do without!  We also went to the ‘mall’ where we spent the best part of two hours sorting ourselves out with America sim cards for our phones.  We ate out that night in an Italian restaurant where the food had familiar Italian names such as bruschetta, pizza and pasta but flavours and ingredients that did not seem to us (regular visitors to Italy) Italian.

The following morning was another two hour long engagement with the bank to sort out bank accounts.  Contrary to what we had heard prior to our arrival, we did not need a social security number either to get a sim or to open a bank account.  You do need quite a lot of other documentation, though, including passport, other secondary id, an American address and proof thereof (i.e. a lease agreement),  home bank details etc.  Afterwards were made our way into the city centre – or downtown Oklahoma City.  It is pretty impressive with an array of skyscrapers and fine municipal buildings but, oddly, no shops to speak of.  It seems now the shops are all out of town in malls and the city centre is purely for business.  The skyline is dominated by the Devon Energy Tower which serves as a monument to Oklahoma’s principal source of wealth – oil.

It certainly feels like a long way from home and, while a lot of it is reasonably familiar, there is also a lot that is quite strange.  So, as Dorothy (Wizard of Oz) noted, we’re not in Kansas, now – we’re in Oklahoma!”