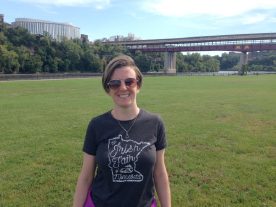 Dr Catherine O’Rourke is Senior Lecturer in Human Rights & International Law, and Gender Research Coordinator at the Transitional Justice Institute, Ulster University. She is a 2016-2017 Fulbright Scholar to the Human Rights Program of the Institute for Global Studies, University of Minnesota, where she will advance a monograph on international law norms for gender equality.

“In 1848, when the founders met to begin the process of incorporating Minnesota as a state, it was decided that Stillwater (a small picturesque city to the east of Minneapolis) would be the site of the state prison, the city of St Paul would host the state capitol, and Minneapolis would be the home to the University of Minnesota (UMN).

I like this story about the origins of Minnesota and the university, as it brings out just how central the university is to the life and identity of the state. My identity as a ‘Gopher’ – so-called after the university mascot, Goldy Gopher – is one I’ve really enjoyed taking on, as I approach the half-way point of my six month research visit to the Human Rights Program at the Institute for Global Studies at the UMN.

The biggest – and most enjoyable – adjustment of my time here has been the sheer scale of the institution. With 50,000 students, the UMN dwarfs any of the universities where I’ve previously studied or worked. As well as being a large research university and a ‘public ivy’, the UMN is a member of the ‘big ten’ conference for college sports, with all of the resources that implies. The campus is a city unto itself, complete with its own road/rail/pedestrian bridge across the Mississippi River to connect the campus East Bank and West Bank, two lightrail stops, two internal bus routes to travel within the campus, a 50,000-seat football stadium and a thriving campus life.

The book aims to provide some legal clarity by mapping the substance of these overlapping and co-terminous international law norms and obligations, considering how they apply to situations of armed conflict. More importantly, by drawing on norm diffusion theory – together with the findings of the PSRP’S Peace Agreement Database (PA-X) on peace agreement provisions on women and gender since 1990, and case study findings gathered by PSRP research partners Conciliation Resources and Rift Valley Institute, in Colombia, Mindanao (Philippines), Nepal and the Democratic Republic of the Congo – the book aims to understand whether and how these international law norms matter on the ground in conflict-affected settings.

The benefit of my time in the US works across each of the book’s different objectives. The concentration of expertise in international law, women’s rights and armed conflict at the University of Minnesota is formidable, across its law and social sciences provision. Moreover, the University of Minnesota has been where much of the most important literature on norm diffusion has been developed. The Human Rights Program at the Institute for Global Studies, to which I’m affiliated, is an outstanding model of practice-based human rights education and research, and is well-connected to the substantial international human rights community that operates out of the Twin Cities, such as the Advocates for Human Rights, Global Rights for Women, International Women’s Rights Action Watch and the Center for Victims of Torture. This is all very important both to the method and substance of my research. Legal doctrine and developments mean little without an understanding of how they shape and inform advocacy and practice in settings of widespread human rights violations. Next month, I’ll travel to New York to attend the Security Council debate on Women, Peace and Security at the United Nations.

The Human Rights Program has a number of direct links to Fulbright. It is a major recipient of Humphrey Fellows in the US. The Humphreys Fellowship program – named in honour of former US Vice-President and proud Minnesotan Hubert Humphrey – is a Fulbright exchange activity. Early- and mid-career professionals primarily from the global South are funded to study in the US for one year in order to support their professional development. I look forward to learning more from these fellows about their perspectives on my research questions.”