Arriving in D.C., All is Not What it seems

Dr Alanna OMalley is a Lecturer of History and International Relations at Leiden University in The Netherlands. As a 2017-2018 Fulbright Scholar to George Washington University, she is investigating the development of the UN in parallel with the emergence of the countries of the Global South from 1955-1981.

"Considering the unexpected result of the American elections last November, and the controversy which has dogged Donald Trump’s Presidency so far, it was hard to know what to expect when arriving in Washington D.C. Would there be scenes of political activism reminiscent of American college campuses in the 1970s or was all the talk of a newly-energized American public just propaganda projected by a disconsolate American press? So far, neither one of these two scenarios seems to be totally accurate. 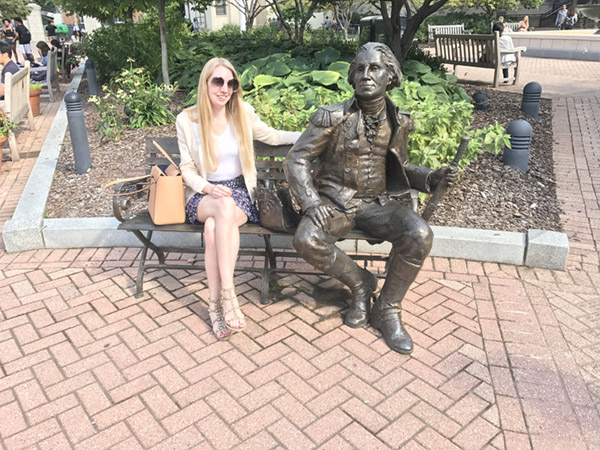 I arrived a fortnight ago with my husband Joris (who has his own Fulbright Schuman scholarship to Johns Hopkins SAIS) to a quiet neighborhood of Capitol Hill. Instead of American flags on every townhouse, many gardens have posters quoting Martin Luther King and are flying rainbow flags - the insignia of inclusivity and openness. I don’t know whether this is a recent development, but I have found, in the neighbors and locals we’ve met so far, a quiet determination that America is still America, and an apologetic attitude towards how “crazy” their country seems to have become.

On the first day, after a typical American breakfast of pancakes and bacon (particularly welcome after 8 hours of airplane ‘food’) we walked along the National Mall. Taking in the Capitol Building, the Lincoln Memorial, the Washington Monument and the White House, it’s hard to believe that we’re really here, living beside these famous monuments to freedom. I’d be lying if I said I wasn’t a bit dismayed that we only encountered some small protests to ‘Free Tibet’, calling for ‘American Troops out of Korea’ and proclaiming ‘Black Lives Matter’. I’ll be keeping my eye out for the next women’s march.

At George Washington University, the beautiful, compact campus has both the satisfying swarm of college students with their mattresses and boxes of books as they move in for a new semester, and the calm serenity of a place for thinking. Getting set up was incredibly easy and efficient, I had a library card within a few days – an essential talisman for a historian! You can even spend lunchtime chatting to a bronze George Washington himself outside the library, with a falafel salad from the food trucks on the street outside – a far cry from my usual ‘lunch al desko’.

Last weekend I ventured into an ‘Irish’ bar to find out if they were going to show the Mayo vs. Kerry game only to discover that nobody had even heard of Gaelic football in that particular venue. I’ll do more research to find somewhere to watch the All Ireland final in September. Reassuringly however, the local supermarket sells Kerrygold butter, if not Barry’s tea. I’ll have to ration the supply I brought with me, or adapt to the native custom here, which seems to be to go everywhere with a paper cup full of coffee.

As for the politics, next week I will attend my first event on the legacy of the Cold War at the Woodrow Wilson Center – let’s see if the debate goes beyond the polite reticence and the hints of resistance I’ve encountered so far!"