Brian Maguire is a painter, an artist who has worked for over 40 years in the area of conflict and human rights. His early projects were with paramilitary groups in Ireland from both sides of the conflict. In more recent years he has worked in the Favelas in Sao Paulo, Brazil 1998/03 and the colonia’s in Cuidad Juarez, Chihuahua, Mexico 2008/13. His research and subsequent exhibitions include traveling through Syria in 2017 to witness the destruction of some of the world’s oldest cities and also to the newest state mired in civil war in South Sudan (2018). He has exhibited in Asia, Europe, America and South America. His work is held by museum collection in Museo De Art De Rio, Brazil, Gementenmuseum Haag, the Netherlands, Juvasklya Art Museum, Finland, Museum of Fine Art, Houston TX USA, Wolverhampton Art Gallery, UK, IMMA, Dublin and the Dublin City Gallery – the Hugh Land, Dublin. From 2000 to 2010 he was The Head of Faculty and Professor of Fine Art in the NCAD, Dublin. From 1985 to 2000 he developed and managed a third level art course in the maximum security Prison in Portlaoise, in Ireland. Often working outside the narrow museum sector he recently presented his Aleppo, Syria series in the headquarters of the UN in New York (Feb 2020.) His Fulbright project in the USA is with the Missoula Art Museum and revolves around continuing disappearances of young native American women. This project has some similarity to work he did in Juarez. 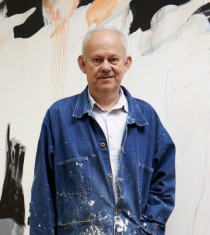